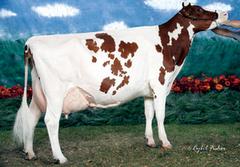 The Ayrshire Breeders’ Association has been advised by the Council on Dairy Cattle Breeding (CDCB) that Covey-Farms Forever Jade, Registration Number 100304923, has genomes present from the Holstein bull, Indianhead Red-Marker-ET, indicating that he is her sire. The CDCB provided data from two separate genomic tests conducted at two different laboratories, DNA Landmarks and Geneseek. The first was a high density test and the second was a low density test. Both tests had the same conclusion: HOUSAM2284915 (Indianhead Red-Marker-ET) is the sire. Genomic test results for Indianhead Red-Marker-ET were in the CDCB genomic database, resulting in this conclusion. He is a red carrier, black and white bull, with no other known recessives.

The official method of parentage verification for the ABA is DNA typing. A DNA case report for “Jade” was completed by ImmGen Inc. in 2006. Her sire and dam had no DNA cases on file as the ABA progressed from blood testing to DNA sampling in the early 2000s. On the basis of the information available to them at the time, the testing laboratory noted that neither parent had genotypes
available. “Jade” met the requirements for being a donor dam by having her DNA profile placed on record at the ABA; and therefore her embryo transfer (ET) progeny were eligible for registration.

As part of the discovery and investigation process, the ABA was thorough in collaborating with experts in this field. “Jade” was flagged for this parentage discrepancy because her sire’s genomics are on file at the CDCB.

Based on the current known facts, the ABA Executive Committee has directed that the pedigree of Covey-Farms Forever Jade, Registration Number 100304923, be corrected to reflect the change in her sire from Covey-Farms Reno Forever to Indianhead Red-Marker-ET. She will therefore be
registered as a 50% Ayrshire. As a consequence of this action, all registered Ayrshires with “Jade” present in their pedigrees will be updated accordingly to reflect the change in Jade’s parentage. All show winnings and production honors earned in the past will stand as they are in the ABA’s pedigree database for every animal affected by this change.

The ABA is confident that this mistake in parentage was an unfortunate accident after consulting with “Jade’s” breeder, Stanley Covey of Rose, OK; and current owners, the partnership of Covey and Tom and Sara Kruse of Dyersville, IA. No blame is being assigned to the breeder or owners of this cow.

Approximately 400 animals (male and female) recorded by the U.S. Ayrshire Breeders Association to date have “Jade” present in their pedigrees. The Association has updated the registry status of these animals and is proceeding to issue replacement registration certificates to their owners.